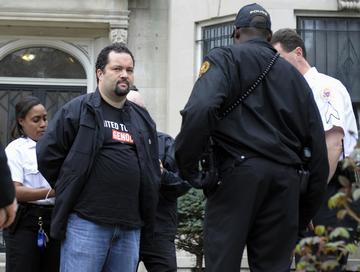 The tweet (below) references an anonymous tip that A Miner Detail received about a domestic disturbance that took place a few years ago at Jealous’ residence – 361 N. Shore Road in Pasadena.

The anonymous emailer wrote to A Miner Detail that “call logs could be obtained by making a FOIA request to the AAPD” (Anne Arundel County Police Department) for Jealous’ home address in the year 2014-2015.”

A Miner Detail will soon release a full report on the incident.

An attorney claiming to represent Jealous, Adam Clark, an associate attorney of Utrecht, Kleinfeld, Fiori, Partners – a D.C.-based law firm that specializes in campaign and election law practice – emailed A Miner Detail Editor in Chief Ryan Miner yesterday at 5:58 p.m., requesting that Miner “remove this tweet and refrain from publicizing Mr. Jealous’ home address out of respect for security considerations.”

A copy of Clark’s email to Miner can be found below:

My name is Adam Clark and I represent Ben Jealous’ gubernatorial campaign. I’m writing in regards to your tweet today which lists Mr. Jealous’ home address.

We are requesting you remove this tweet and refrain from publicizing Mr. Jealous’ home address out of respect for security considerations.

Mr. Jealous has had death threats dating back almost two decades, and by publishing his personal address, you are unnecessarily heightening security risks for both Mr. Jealous and his family.

Jealous’ home address is public record and is listed on Maryland’s State Board of Elections website.

Jealous, a first-time candidate for public office in Maryland, is the former head of the National Association for the Advancement of Colored People. In September 2013, Jealous resigned from his NAACP post, citing “family reasons.”

In announcing his resignation, Jealous claimed he wanted to spend “a lot more time with my young family.” Jealous was, at the time, married to Lia Jealous.

Jealous and his running mate, Susan W. Turnball, are one of eight Democratic teams vying for the Democratic nomination, hoping to take on popular Republican Gov. Larry Hogan in the November general election.

Maryland’s primary is slated to be held on June 26.

Ben Jealous still wants to be governor – but can he clean up his 2018 mess?

Ben Jealous: Take a knee with me