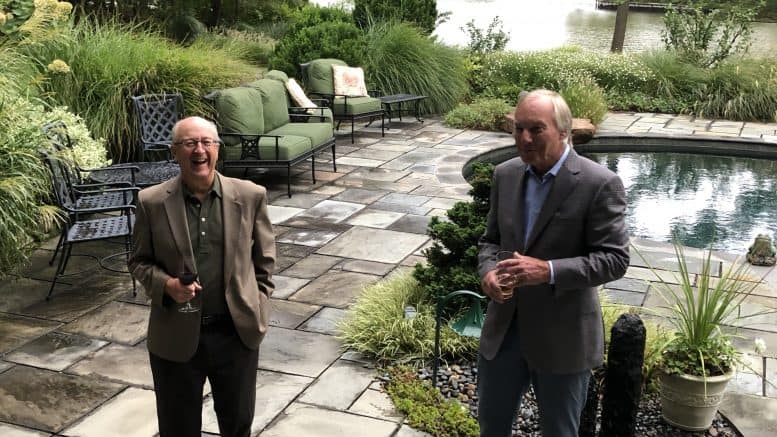 Maryland’s Comptroller Peter V. R. Franchot (D) is not a full-time resident of the Eastern Shore, but he certainly could be considered a resident guest.

On Friday, the state’s chief fiscal officer defied the Baltimore Sun’s editorial board, trekking across the Gov. William Preston Lane Jr. Memorial Bridge as the guest of honor at a campaign fundraiser hosted at the picturesque Easton home of Ellen and Richard Bodorff.

The recent announcement by Franchot himself that he’s chewing the proverbial gubernatorial cud has triggered the necessity for ramping up his campaign fundraising circuit and expanding the comptroller’s already ubiquitous statewide omnipresence.

Franchot’s Friday-night fundraiser was broken into two segments: A 5:00 p.m. “Private Host Discussion” at $2500 per couple and a 6:00 p.m. “General Reception,” where couples paid $1000 to question Franchot on his future political plans.

“At the end of my term, I will have been comptroller for 16 years, taking a relatively sleepy agency and making it into one of the preeminent comptroller offices in the country,” Franchot began, speaking to an audience of about 50 people that included several Democrats and a handful of Unaffiliated voters and registered Republicans.

Franchot said the gubernatorial campaign is “wide-open” and that he’s “seriously considering” jumping into the race – but, Franchot said, the decision would come at the price of him giving up what little privacy he has, something that is important to his family, especially his wife.

If Franchot takes the plunge into the Democratic primary, he said he vows to do “fundamental reform.”

“I’m not interested at the end of my career to go along to get along.”

Jumping to a key political theme central to the comptroller’s political persona, a self-described outsider looking in, Franchot reiterated his well-known tenuous relationship with the “Annapolis Political Machine,” which he says has dominated his political party – the Democrats – for years.

“I would be, I think, a breath of fresh air in that I would be honest, accountable, transparent and competent,” Franchot mused openly as the onlooking audience sipped cocktails and munched on homemade hors d’oeuvres.

“I’m pretty confident that I’m the right person at the right time,” Franchot said. “If all of this works out, I think you’ll be very pleased with someone who comes in and seeks the trust of the people, seeks a fiscally moderate approach to money so that we are not spending money on things that sound good without any review as to what the results are.”

Punching on six specific campaign themes, which could easily end up on a future gubernatorial campaign mailer, Franchot sold himself as “independent,” electorally strong, and someone with competence, honesty, transparency and accountability.

No Franchot event is typically deprived of a mention of the longtime – and now deceased – Maryland Comptroller Louis L. Goldstein.

Standing on the back porch, one of the fundraiser attendees reminded Franchot, who just finished a story about Goldstein, that the comptroller’s late predecessor’s indelible act of generosity included handing out iconic coins to fellow Marylanders, followed, like clockwork, of course, by his verbal six-word signature phrase: “‘God bless you all — real good.”

Not missing a step, Franchot hopped up the stairs and onto the back porch; he retrieved a gold coin from his pocket and gleefully presented the man his own version of a comptroller’s gold coin, which costs around four dollars a pop.

Franchot is expected to wait until after the 2020 presidential election to formally announce his gubernatorial intentions. With a million dollars already nestled away in a campaign account, the 71-year-old Takoma Park husband and father of two aims to raise a half-million dollars by the end of this year.

It is possible that Franchot’s decision to announce early his 2022 Democratic gubernatorial intentions could, potentially, scare off other Democratic rivals.

Some Maryland Democrats were angered by Franchot’s decision last year to stay out of the gubernatorial contest. Franchot, citing his working relationship with Gov. Larry Hogan (R), withheld an endorsement for Jealous, another political outsider far to the left of Franchot’s personal politics.

Franchot did, however, endorse a number of Maryland Democrats in 2018 whom he identified as political outsiders unafraid to challenge the Annapolis Machine.

Alsobrooks told A Miner Detail at the annual J. Millard Tawes Crab and Clam bake this July that she is not planning to run for governor in 2022.

Booze Battle: Franchot, Kramer get personal over legislation that would strip comptroller’s office of regulatory authority

Be the first to comment on "Franchot, a frequent Eastern Shore guest, highlighted 6 themes of a potential gubernatorial bid at a Friday-evening Easton fundraiser"