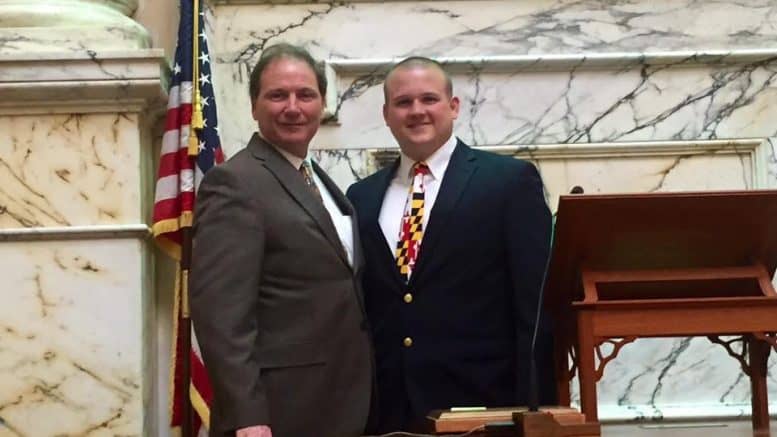 Walch at the time was working as a campaign aide for Impallaria.

Maryland political campaigns are required by state law to identify who is responsible for all content released. Walch could face a year in jail or fines up to $1,000 for improperly concealing the party responsible for the call that targeted Impallaria’s seatmate a day before the June primary election.

Both prosecutors and Walch’s defense attorneys agreed that the matter would not be resolved before the originally scheduled March 12 trial, according to court documents obtained at the District Court of Maryland for Baltimore County.

The same court documents state that Impallaria “would not be available to testify until the end of the legislative session,” which concluded last Monday. Both the State and Walch’s defense counsel anticipate that the case will last only one day.

The State also anticipates calling between four and nine witnesses, whereas Walch’s counsel intends to call between two and three witnesses.

Walch’s alleged robocall falsely claimed that Szeliga “was a true friend of the transgender community” and supported legislation from 2016 “making it illegal to discriminate against transgendered persons.”

State prosecutors did not charge Impallaria in the matter, citing a lack of evidence that Impallaria was directly involved.

Walch is said to have approached Salisbury University graduate Alison Porter to voice the call.

Sources claim that Walch and Porter dined together at the Annapolis Cheesecake Factory, where they consumed alcohol and devised the plan to record the call. Porter subsequently narrated the dubious call as Walch recorded.

Porter was employed at the time as a part-time finance assistant for Republican Craig Wolf’s attorney general campaign. Upon learning that it was Porter’s voice narrating the dubious call, she was immediately fired from the Wolf campaign.

Despite being fired in January by the late Speaker Micheal E. Busch after Busch’s office learned of Walch’s charges, the former Impallaria aide was spotted in Annapolis on March 13 attending a fundraiser dinner co-hosted by Italian-American lawmakers at St John’s College.

Walch, who was accompanying Impallaria at the fundraiser dinner, acknowledged that his trial was moved but refused to comment further.