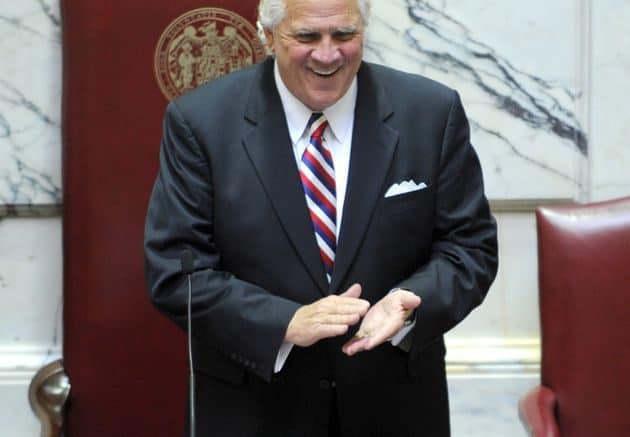 Maryland Matters Editor Josh Kurtz astutely postulated in a column last week that one would have to be delusional to know for sure the outcome of the Senate Democrats’ Thursday Caucus meeting.

Kurtz is right, of course.

From the information that A Miner Detail has gathered from various Annapolis sources, Senate President Thomas V. “Mike” Miller Jr. is expected to update the Senate this Thursday on his health and his future plans. As a review, Miller promised at the conclusion of the 2019 legislative session that he would periodically update his Senate colleagues on the status of his health.

In January, Miller publicly announced that he was struggling to cope with Stage 4 prostate cancer that had metastasized to his spine. The still-spry 76-year-old political lion told his elected colleagues in a June letter that the “the news is largely good” regarding his health, after being treated with an aggressive form of chemotherapy and an injectable form of radiation.

Miller in August, robust and chipper as ever, was a feature at the annual MACo conference events, looking healthy and tanned. Since MACo, Miller has attended a number of public events.

Excluding the Kirwan Commission behemoth, the Maryland political chatter has been rather dull as of late. One issue, however, may never elicit a yawn from the Maryland political class: The succession plan – the “what happens next” standard operating procedures – if Miller does decide to step down as Senate president in the near future.

Miller has been on the job as Senate President for 33 years – long enough to be deemed worthy of having a building named in his honor.

While nobody is willing to explicitly state Miller’s intentions – again, probably because they truly don’t know – two of Miller’s Senate colleagues told A Miner Detail on background that they expect Miller to announce that he intends to step down as Senate president before the beginning of the 2020 legislative session but remain in the Senate until his term expires in 2023. At the end of his term, Miller is expected to retire, sources say.

One thing is absolutely certain: The next Senate president will undoubtedly be a Democrat – but which one?

Another Senate Democrat half-jokingly suggested that Sen. Cheryl Kagan (D-Montgomery) is interested in succeding Miller. They were only half-joking.

So how would each of the four aforementioned senators handle the Senate president gig?

Very differently, one could speculate.

King and Peters could be viewed as the consensus moderates amid the four, while Pinsky and Guzzone are seen as reliably more politically progressive.

One Senate Republican who asked to speak on the condition of anonymity so as to speak candidly about the succession race told A Miner Detail that with a Peters or King presidency, the Senate will essentially remain unchanged; the status quo would, therefore, remain in place.

Miller has largely operated as a political moderate throughout his tenure leading Senate Democrats. Should Peters or King be selected to replace Miller, the Senate would remain the more moderate of the two General Assembly chambers.

On the flip side, the same Senate Republican said that the Senate would move much further to the political left (similar to the House’s current political calculus) if Pinsky or Guzzone is elected to replace Miller, posing a formidable short-term challenge to the effectiveness of the Senate Minority Caucus.

Should a leftward shift occur, though, Senate Republicans could be handed a silver lining.

The Maryland Republican Party and the Senate Republican Caucus vow not to repeat their 2018 political mistakes. Three years out, some Senate Republicans have begun strategizing how to run campaigns to return the so-called “purple districts” into Republican hands, telling A Miner Detail that replacing Miller with Guzzone or Pinsky may prove to be a grave political error should the Senate drift hard to left under their respective presidencies.

Republicans are eyeing to recapture a number of Senate districts in particular, including Districts 8, 9, and 30.

Sources close to the Senate Republican Caucus tell A Miner Detail that former Baltimore state Del. Christian Miele (R-Baltimore County) has on multiple occasions stated publicly that he intends to wage a 2022 rematch against his former opponent, Sen. Kathy Klausmeier (D-Baltimore County). Miele, who lost a close Senate race to Klausmeier in 2018, joined the Hogan administration in January as a deputy secretary for the Department of Disabilities.

Only the 32 members of the Democratic Caucus will know exactly what happens in Thursday’s meeting.

Whatever does happen, the content of the meeting will surely leak.

If Mike Miller relinquishes his Senate reins, the trajectory of the Senate’s agenda would be largely unknown. What is known is that Republicans are tired of losing in Maryland, and 2022 isn’t that far away.

Turning down a future gubernatorial bid, Paul Pinsky dings Franchot as ‘too conservative’