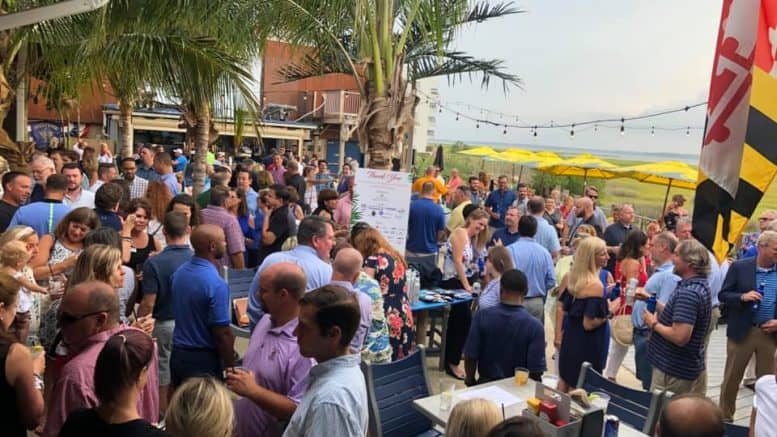 Still reeling from Capitol Strategies’ Wednesday-night blowout banger, all the good boys and girls of MACo treated the Thursday-night receptions and parties with a noticeable restraint, in comparison to the previous night’s festivities.

After all, Thursday was a school night for many of the county officials attending the annual Ocean City summer retreat – on the taxpayers’ dime, of course.

It would be a monumental feat to top MACo’s Night 1 parties.

One might guess how many times a year does Senate President Mike Miller’s daughter, Melanie, explode in anger at the comptroller’s chief of staff, and, in the same breath, with a twist of the torso, accuse a certain member of the Maryland press giving out complimentary political hummers?

Oh, nearly every Monday night during Annapolis Session, after a few glasses of Harry Browne’s house Merlot, you say?

So, what happened on Thursday night downy oshun?

Democrats, Republicans – it didn’t matter; this was the party to be at if you wanted to be seen.

The affable Jennings didn’t just throw a party: He expertly marketed himself as the leading Republican in Maryland’s upper chamber. The turnout at Jennings’ party demonstrates the depth at which his colleagues respect his leadership, so the buzz goes.

The 2020 Annapolis Session legislative agenda was the hot buzz of the Jennings’ summer hootenanny. Will marijuana legalization be taken up next session? Will Death with Dignity get a second look? What’s the budget going to look like? Is Hogan really not running for president? Is Trump going to lose? Is Hogan going to do more late-night television?

The other political gossip swirling about was the painful discussion of who will replace the Senate President should he decide to step down before his term ends. There is some buzz surfacing that Sen. Brian Feldman (D-Montgomery) would be a consensus choice amid the competing Democratic factions. Miller has not and likely will not choose his successor – but “who’s it going to be” was the question on many minds yesterday evening.

State Sen. Johnny Ray Salling (R-Baltimore County) told A Miner Detail that he approached Rep. Ruppersberger at Jennings’ event and informed him that he was running for Congress. Shortly after Salling’s gentlemanly overture, one Republican state senator joked that Salling wouldn’t break 40% in a race against the longtime incumbent Democrat Ruppersberger. Except it probably wasn’t much of a joke.

It’s not for nothing when political figures like Jennings throw big parties with good food and open bars.

It’s no secret that Jennings would welcome a future in the U.S. House of Representatives. But Andy Harris is still in his way.

(Mrs. Harris is probably in Jennings’ way, too. It’s delightful watching Mrs. Harris swarm to every photo opp with her husband. She’s even known to introduce herself as “Congressman Andy Harris’ wife.” Lucky for Maryland’s 1st Congressional District, they have a Bill and Hill blue-light special going on: Two for the price of one. Isn’t the 1st lucky?)

Overall, Jenning’s sunset extravaganza was bar none the best evening-time reception at the 2019 MACo conference.

Ah, Seacrets Resorts & Spas: It brings back memories to those college days when penicillin was an add-on in your morning hangover treatment plan. Remember our younger days leaving secrets at Seacrets after a day of debauchery spent idling in piss water?

Once inside, Western Maryland native Rylie Shewbridge – one of Annapolis’ best-known and well-connected networkers, and a rising political star – turned on the ol’ Cumberland charm, flashing that smile and greeting guests.  Shewbridge may be A&C’s secret weapon: Clients love her, they say; she knows, like, everybody; and she’s no-nonsense. Keep an eye on her career; she’s going places, as the proverbial saying goes.

It was nice to see the entire A&C staff in matching logoed polos and khaki shorts. Branding is everything these days.

Overall, this was a party worth attending – especially for the polite bartenders who kept the drinks flowing.

The night for most MACo partygoers ended at the 45th Street Taphouse at MD Strategic Consulting’s blowout event.

And, My God, was it full. This was yet another event that if you wanted to be seen among the political elite of Maryland, you were there.

There was some weird shit going on at that party.

Funky make-out sessions; some rather inappropriate groping just waiting to turn into #meToo moment; um, there might have been an actual pimp there (that hasn’t been fact-checked); a blue-shirt man (we all experienced him).

But, really, the event was fun. Really. It was where you needed to be if you wanted to have a good time.

Prince George’s County Executive Angela D. Alsobrooks (D) was greeted with a rockstar reception. She made her way through the crowd, greeting guests and making small talk. State Sen. Ronald Young (D-Frederick) and his wife, Del. Karen Lewis Young (D-Frederick) chatted with guests while seated at the bar. State Sen. Brian Feldman (D-Montgomery) made his rounds, too.

You might have been caught a glimpse of Del. Carl J. Anderton Jr. (R-Lower Shower) puffin on a premium Padron cigar. And, fresh off launching his second mayoral bid on Tuesday, Salisbury Mayor Jake Day (D) worked the crowd like a pro.

MACo Night 1: The Parties worth remembering

Be the first to comment on "MACo Night 2: Downy Oshun Hun"