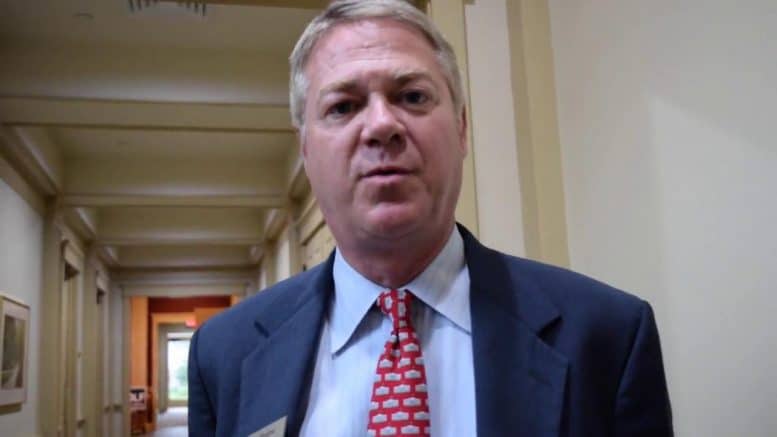 “I believe our Maryland Republican Party’s House is divided and is falling apart,” Campbell wrote in an email to the state’s Republican Executive Committee.

The unofficial Executive Committee meeting was slated as an opportunity for “the governing body of the Maryland Republican Party to have a productive conversation regarding the state” of its organization, Campbell’s email read.

Haire on Monday committed to joining Campbell’s call: “I will be on there to continue to correct  inaccuracies and confirm that those who do what you are doing will most certainly not be rewarded with discretionary party roles as long as I’m the Party Chairman.”

“You and a small number of others are upset because you disagree with how I and President Trump’s campaign are utilizing our discretion on how to make sure we have a unified team,” Haire wrote.

“Instead of disagreeing professionally and factually, you went running to our enemies’ (sic) to create a fake narrative of dissension. And you wonder why I’m ticked off?”

Haire went on to accuse Campbell and other Republican leaders of leaking “nonsense to liberal bloggers and the Baltimore Sun.”

Some of the Republicans who joined Tuesday’s marathon call said they felt “pressure” from Haire to support incumbent Nicolee Ambrose over former Maryland Republican Party Chairwoman Diana Waterman in the state committeewoman race.

Ambrose and Waterman have been busy lining up supporters and touting endorsements from Maryland GOP leaders and elsewhere.

In a surprising move, President Donald J. Trump (R) signed a letter of support on behalf of Ambrose, and he urged Maryland Republicans to support her.

Haire submits that supporting Waterman over Ambrose will be viewed as an act of insubordination and one that could cast doubt over whether some Maryland Republicans are truly loyal to the president.

The state GOP boss is already following through on his threats.

Ndebumadu is expected to support Waterman over Ambrose in the state committeewoman race.

Maryland Republican Party Second Vice Chairman Tony Campbell was one of a handful of Republicans who signed a letter requesting Haire re-invite Ndebumadu to offer remarks at this weekend’s convention.

Campbell, who also serves as the state Party’s chaplain, eventually emailed an apology to Haire for failing to fully vet the letter. “I should have done my due diligence in making sure all of the information was accurate.”

“What did I get for reaching out with an apology? A phone call where the Chairman cursed me out and threatened me. The cursing included the usual F bombs and other words which are not used in polite company,” Campbell wrote in an email.

Campbell has not stated how he will vote in Saturday’s state committeewoman race.

“I can hardly speak because of the fact that I’m so upset by the fact that we have been pressured,” remarked a Queen Anne’s County Republican Tuesday, who was audibly distraught over Haire’s conduct.

“But when the intimation was made that somehow by not falling in line, you would potentially lose that opportunity [to go to the national convention as a Trump elected delegate or alternative], I find that abhorrent,” the Republican said.

“And very honestly, I would encourage anyone who is concerned about the righteousness of a fair vote to vote for Diana – even if it’s just to send a message that you can’t be intimidated,” he said.

During Tuesday’s call, one of the county Republican central committee chairs said he is concerned that Party infighting is “creating very easy narratives” for The Baltimore Sun and The Washington Post, or anyone else to write stories about this.”

“I feel it’s dangerous that there is a ready-made narrative out there of the Maryland Republican Party is purging black Republicans. I think that’s very concerning for me,” said the GOP county chairman.

Later in the call, a prominent black Republican said that while he has his issues with Haire, he did not view the chair’s actions towards some of the Party’s black Republicans as racially motivated.

“But I did not ever think that our Party was being racist to me,” he said emphatically.

Her voice cracking at times, another county Republican questioned whether Haire “is aware of the optics” of the Party’s infighting.

“When we have two African-American rising stars, and we’re very proud to show that Republicans can reach out to minorities and to create diversity. And it sounds like a purging now, of the Republican Party,” the woman said.

She said that her county’s Republican central committee is “very, very disappointed” over [Haire’s] emails.

Another Republican who participated in Tuesday’s call expressed existential dread, “I fundamentally, I don’t know how we put all of this back together again’; it’s torn apart.”

Little was resolved on Tuesday after nearly two hours and ten minutes, though most Republicans on the call agreed to three recommendations introduced by one of the GOP county chairmen.

They agreed to stop emailing their grievances to the entire state Republican body. They also agreed to stop talking to the press and to ensure Saturday’s election is “as brief as possible.”

“I think it needs to be a very fair election, the same County chair remarked.

A Miner Detail joined the Republicans’ call Tuesday after it was provided login credentials by a handful of state Republican Party officials.